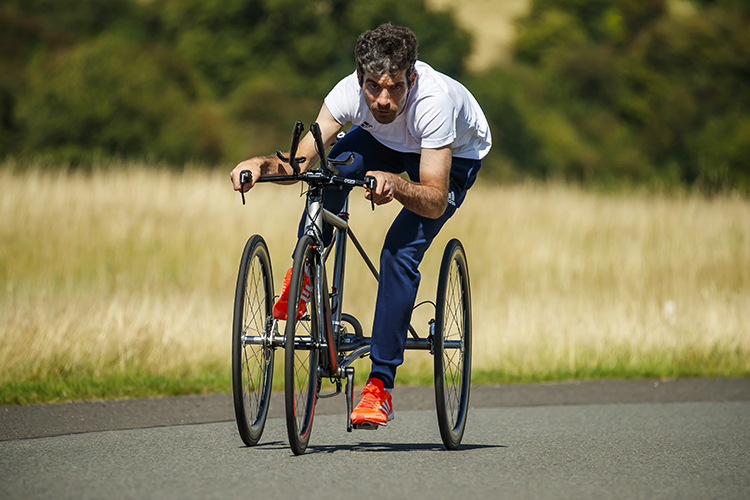 LONDON – Nissan, as proud partner of British Paralympic Association (BPA), has used its automotive expertise to support some of the British athletes heading to the Rio 2016 Paralympic Games. In partnership with the English Institute of Sport (EIS) and British Cycling, the Nissan Innovation Team based at the Nissan Technical Center Europe (NTCE) has used its engineering and innovation prowess to develop a new trike for three-time Paralympic gold medallist David Stone MBE.

The Nissan Innovation Team began the project in 2014, following many of the same procedures involved in designing a car. Following a full 3D laser scan of David’s existing trike by Nissan Design Europe, a process usually reserved for styling clay models, the team established his new trike could be made lighter than his existing steel / carbon hybrid and his riding position lowered to significantly improve his speed and stability.

The team chose to design the new trike using Titanium Grade9, achieving weight savings of 18 percent. Their approach followed the same basic material and design philosophy that was applied to the lightweight titanium exhaust system on the Nissan GT-R NISMO. In the same way a Nissan GT-R driver would notice the reduced weight and improved acceleration, David will notice his new trike can now accelerate faster off the start line and out of slow corners.

Utilising titanium over steel also allowed Nissan to stiffen up the frame, which is key for transferring the power between rider and road. To measure the stiffness of David’s current trike, highly specialised modal analysis was conducted by Nissan engineers, where sensors were placed across the frame to measure its resonance. The Nissan GT-R NISMO was also tested and developed using the same method.

Nissan also discovered that David’s original trike was built up of a standard bike frame bonded to a heavy steel trike conversion kit, meaning it was over engineered and heavy. Using the 3D scanning tools the Nissan Innovation Team were able to develop a fully integrated trike design, incorporating a dual wheel drive system. This allows both wheels to be powered yet independently free wheeled, similar to the rear differential on a car.

Throughout the process Nissan also adopted various other techniques such as ‘coast down testing’ of the trike on a track – similar to that used to calculate the aerodynamic efficiency of cars – and allowed David to have access to their environmental chamber where he prepared in high temperature conditions as part of his training programme.

Alec Patterson, R&D Project Manager, who led the team of innovation experts at Nissan Technical Centre Europe (NTCE) explained: “Nissan initially discussed with the EIS the ways we could utilise our engineering development expertise for the benefit of Rio 2016 – bound Paralympic athletes. The David Stone trike project was chosen as it offered potential for significant improvement and could directly benefit from our in-depth experience of vehicle design and manufacture.

David Stone commented: “It’s been an extremely exciting couple of years working with Alec and the Nissan Innovation Team in Cranfield. I never imagined that I would have access to a team of engineering experts who would be able to create something so bespoke for me. I’m looking forward to riding the new trike in Rio and hopefully making everyone back in Britain proud.”

Tim Hollingsworth, CEO of the British Paralympic Association commented: “We’ve been delighted about working with Nissan on our road to Rio 2016, and have been excited about the innovative approach they have brought to the partnership. Having access to the expertise and knowledge within the Nissan Innovation Team to benefit some of our athletes is something truly special that they have and hopefully it will help assist the ParalympicsGB team in having a successful Games in Rio”.

In addition to the trike project, Nissan has also provided consultancy to the EIS on various other aspects of how the British Paralympic team’s equipment could be optimised ahead of Rio. This has included support on identifying a new type of wheelchair roller for athletes warming up ahead of races, feedback on materials for wheelchair athlete’s gloves and input on the best types of testing methods for grip testing wheelchair tyres in various weather conditions.

Nissan also offered support to ParalmypicsGB T54 sprint competitor, Richard Chiassaro, by providing him with a new wheelchair after his was vandalised in December 2015.

To find out how Nissan have supported athletes in the build up to Rio 2016 visit: https://www.nissan.co.uk/experience-nissan/partnerships/nissan-team-gb-and-paralympicsgb.html

The Nissan trike project is one of a number of other Nissan Rio related activities for the Rio 2016 Olympic and Paralympic Games, including Nissan’s gold LEAF giveaway as launched by Sir Chris Hoy, Nissan’s Ultimate Sports Day, the Nissan Olympic fleet announcement, Usain Bolt vs Fire campaign.

About Nissan in the UK

About Nissan in Europe
Nissan has one of the most comprehensive European presences of any overseas manufacturer, employing more than 17,000 staff across locally-based design, research & development, manufacturing, logistics and sales & marketing operations. Last year Nissan plants in the UK, Spain and Russia produced more than 635,000 vehicles including award-winning crossovers, commercial vehicles and the Nissan LEAF, the world’s most popular electric vehicle. Pursuing a goal of zero emissions and zero fatalities on the road, Nissan recently announced its Intelligent Mobility vision. Designed to guide Nissan’s product and technology pipeline, this 360 degree approach to the future of mobility will anchor critical company decisions around how cars are powered, how cars are driven, and how cars integrate into society. Nissan is positioned to become the most desirable Asian brand in Europe.